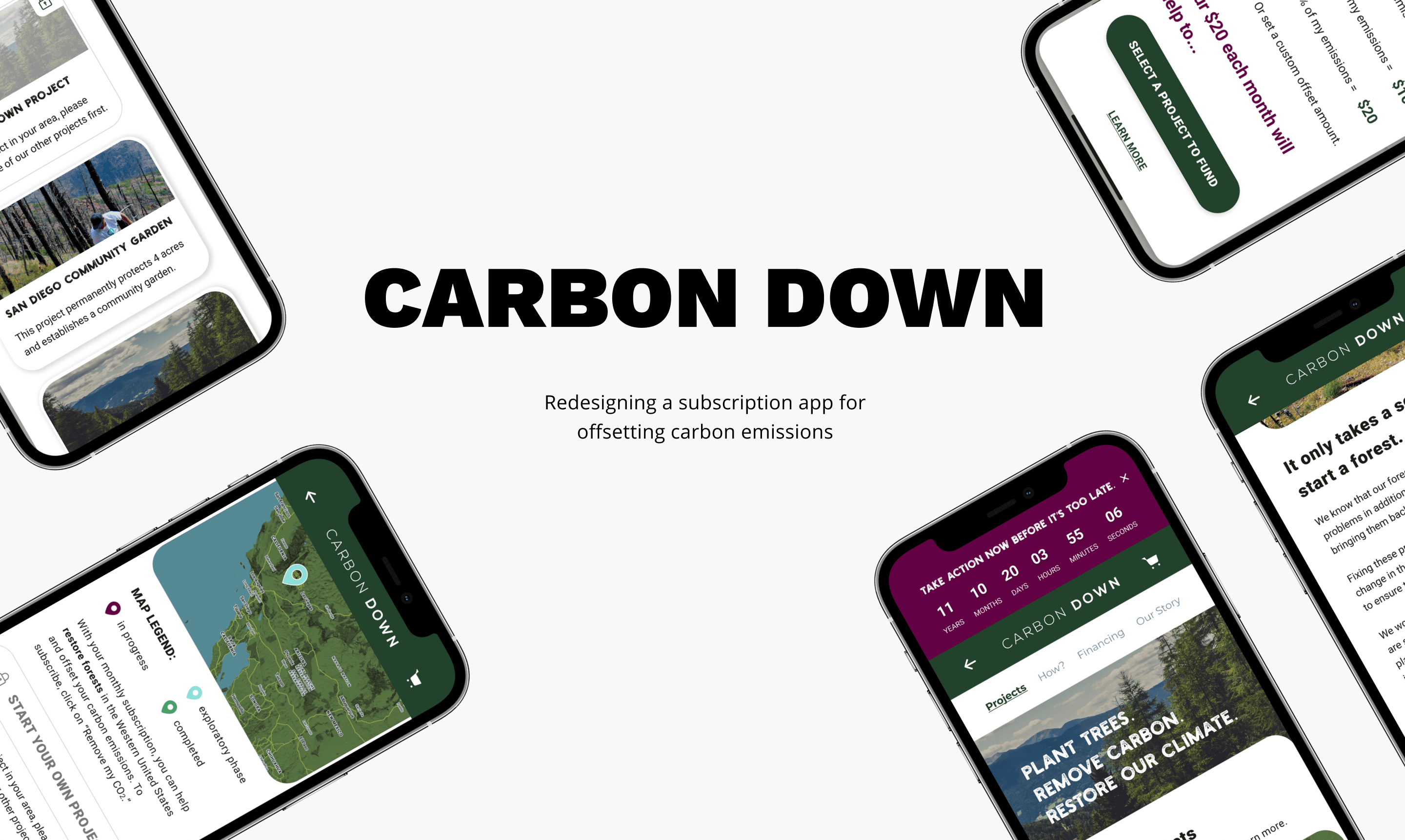 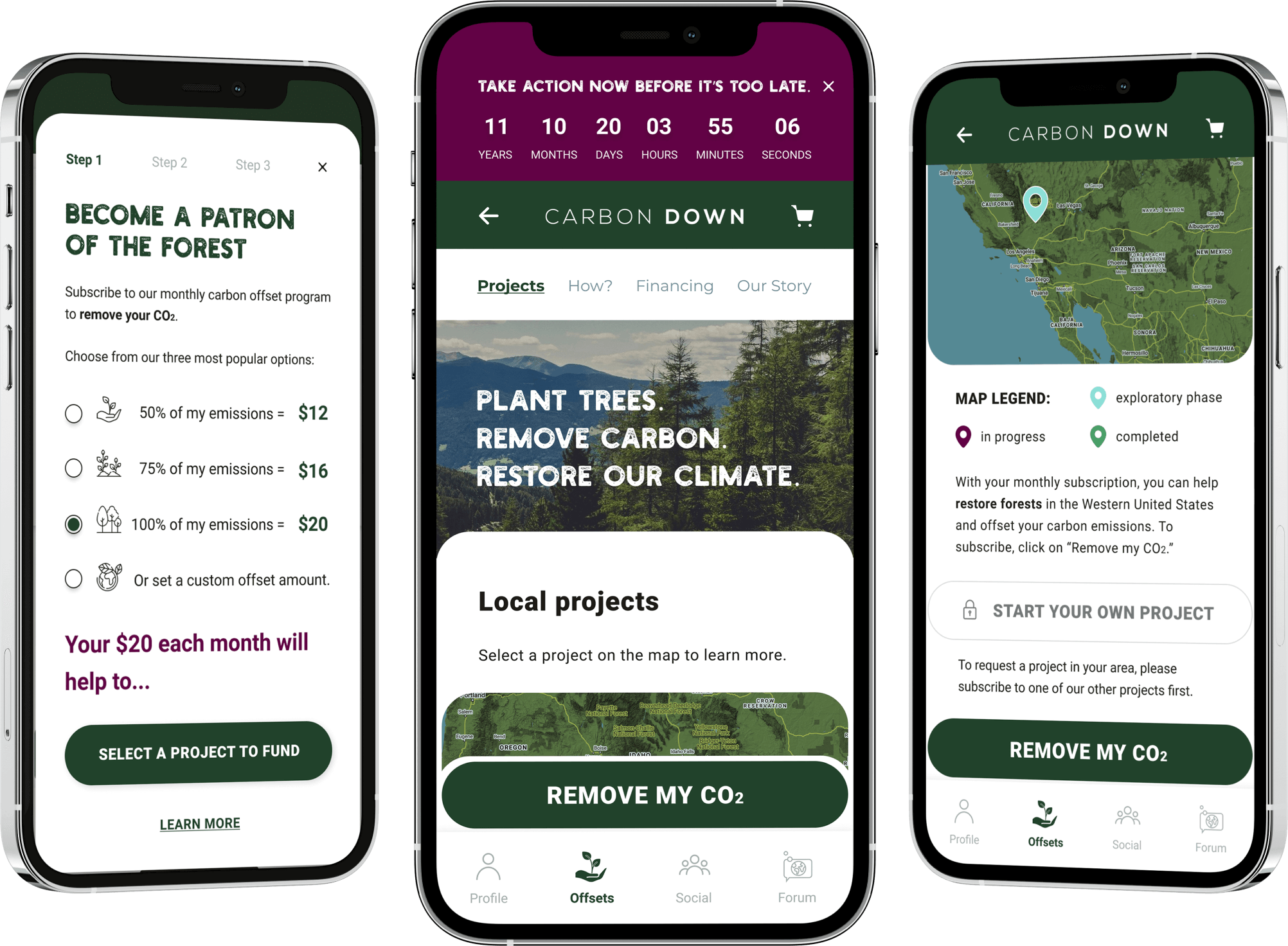 For this project, I worked with Carbon Down – a company that sells carbon offsets in the form of reforestation. They were looking to rebrand their company and they brought me on to do a redesign of their carbon offset page, subscription screens, and to determine new colors, typography, and icons for their site.

Carbon offsets are intangible. There are no physical products that users would receive with their purchase. Carbon Down needed to find a way to inspire trust with new users as well as empower them against climate change.

I was the solo UX Designer - acting as both UX Reseracher and UI Designer, and I worked closely with the CEO and co-founder of Carbon Down – Leif Gonzalez-Kramer. My challenge was to redesign the carbon offset project page. 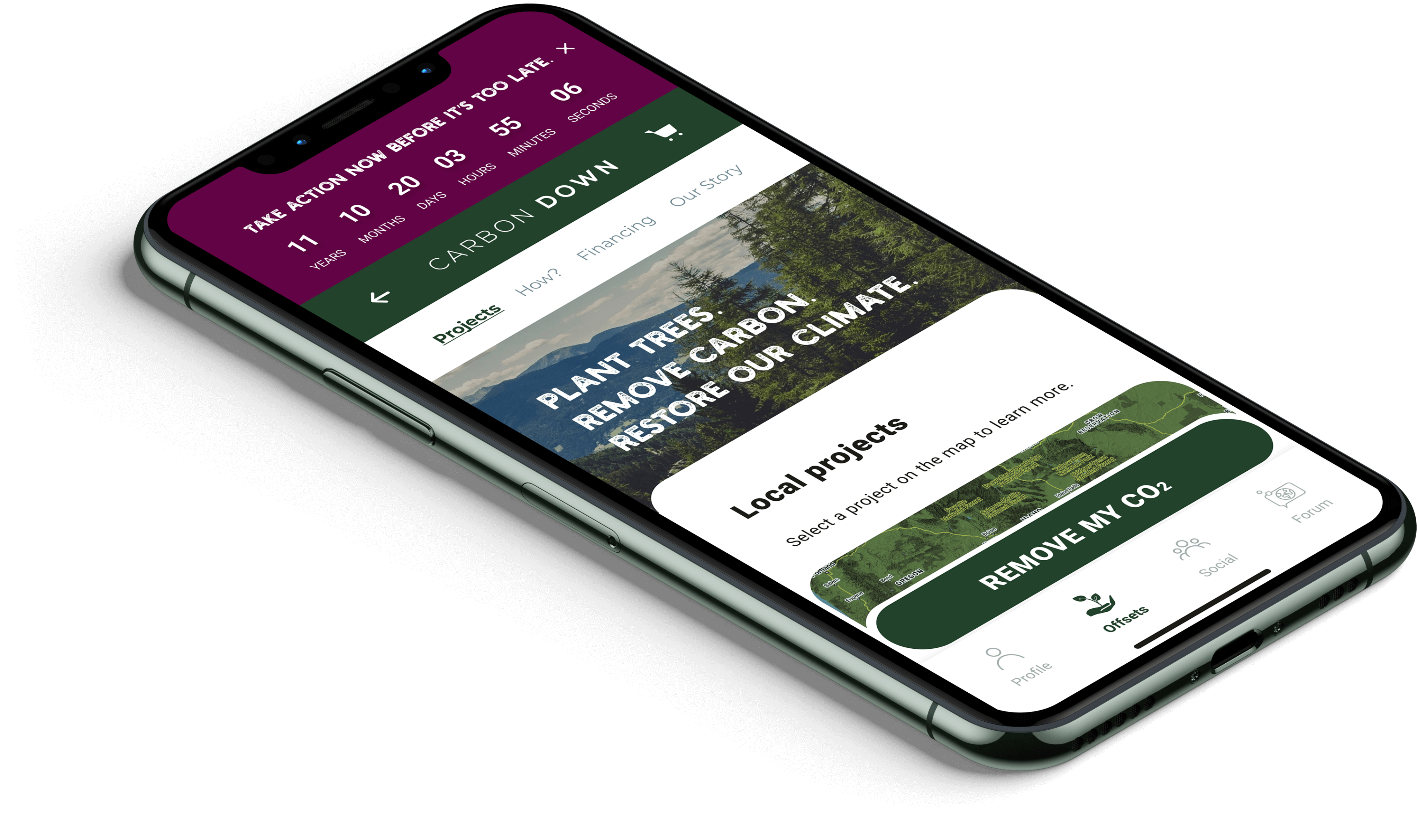 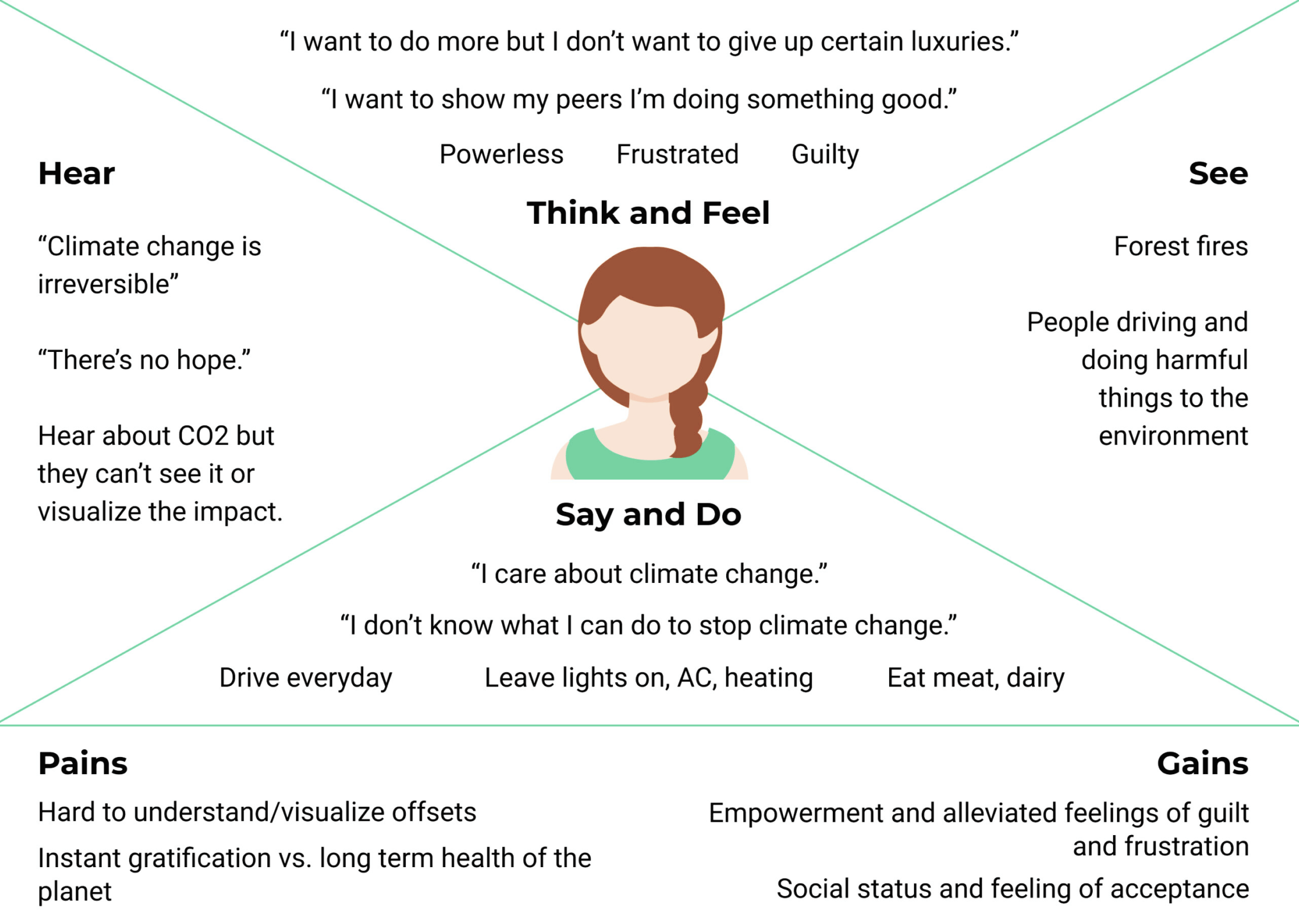 I checked out some of Carbon Down’s competitors. I looked at 4Ocean, Joro, Pachama, and Project Wren. I found some great inspiration for how to break up dense text with imagery, icons, and bright colors. I also discovered ways to sell carbon offsets.

I conducted 4 remote moderated usability tests on Carbon Down’s existing app with females living in the Western U.S. who care about climate change. I began each test with a mini-interview to discover users’ feelings towards climate change, how much they know about carbon offsets, and to get a feeling of some of their pain points when it comes to reducing their emissions.

2. Before purchasing offsets, users felt they needed to trust the company more.

3. Users wanted to know what else they could do to offset their carbon emissions and they wanted some form of community in the app.

My initial wireframes were too content heavy. There were six screens focused heavily on educating the users. After speaking with the team, I realized these wouldn’t do a great job of selling carbon offsets. The company had a different vision of what they wanted, so I needed to change the structure before my first usability tests.

I changed the layout of the wireframes to make them simpler and more straightforward. I began with a design that showed the offset projects. Underneath the introduction, there would be a map of the projects with more information. Under the map, users could also learn more about starting their own project. The next screen would define carbon offsets in terms of reforestation. Reforestation feels more tangible than carbon offsets as a whole. The final screen would inform users about Carbon Down to inspire trust with the users. 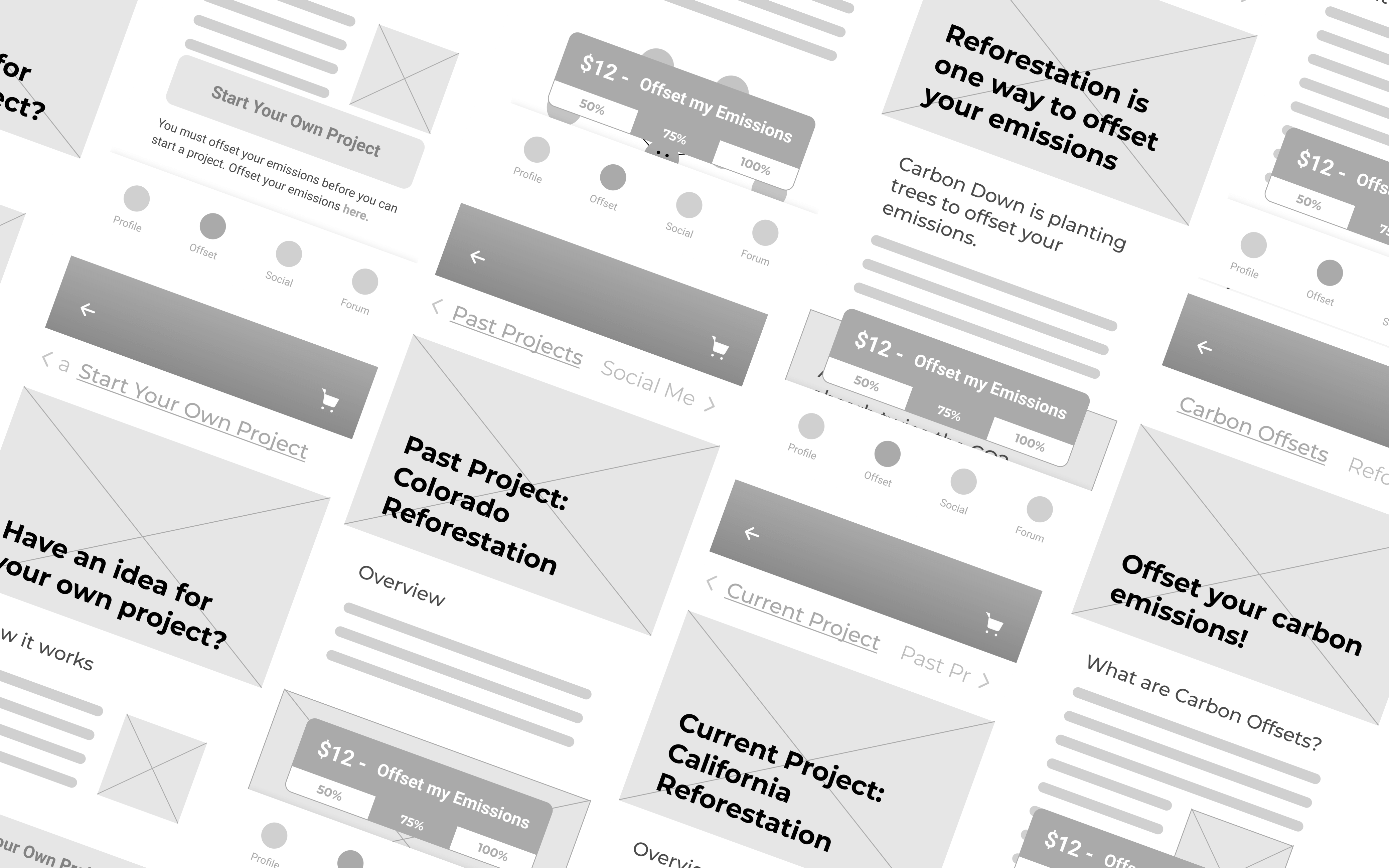 I then started looking for new colors, icons, and fonts. The founders of Carbon Down were looking for a design that was rugged yet sleek and sexy. They wanted a darker color scheme that felt professional. I created a style guide that represented this new feel. While I wouldn’t design the entire app, the team would be well positioned to continue along because of my style guide.

I created 2 prototypes (using Figma) with the new color scheme, typography and icons. I then conducted A/B testing. I wanted to see how users felt about being asked to subscribe earlier on in the process, and see if it helped alleviate shock that users often felt when asked to pay money later on in the process. Prototype A directed users to the subscription screens immediately. Users could choose to learn more about carbon offsets or subscribe right away. Prototype B directed users to the offset projects page first where they could then choose to subscribe by selecting “Remove my CO2”. 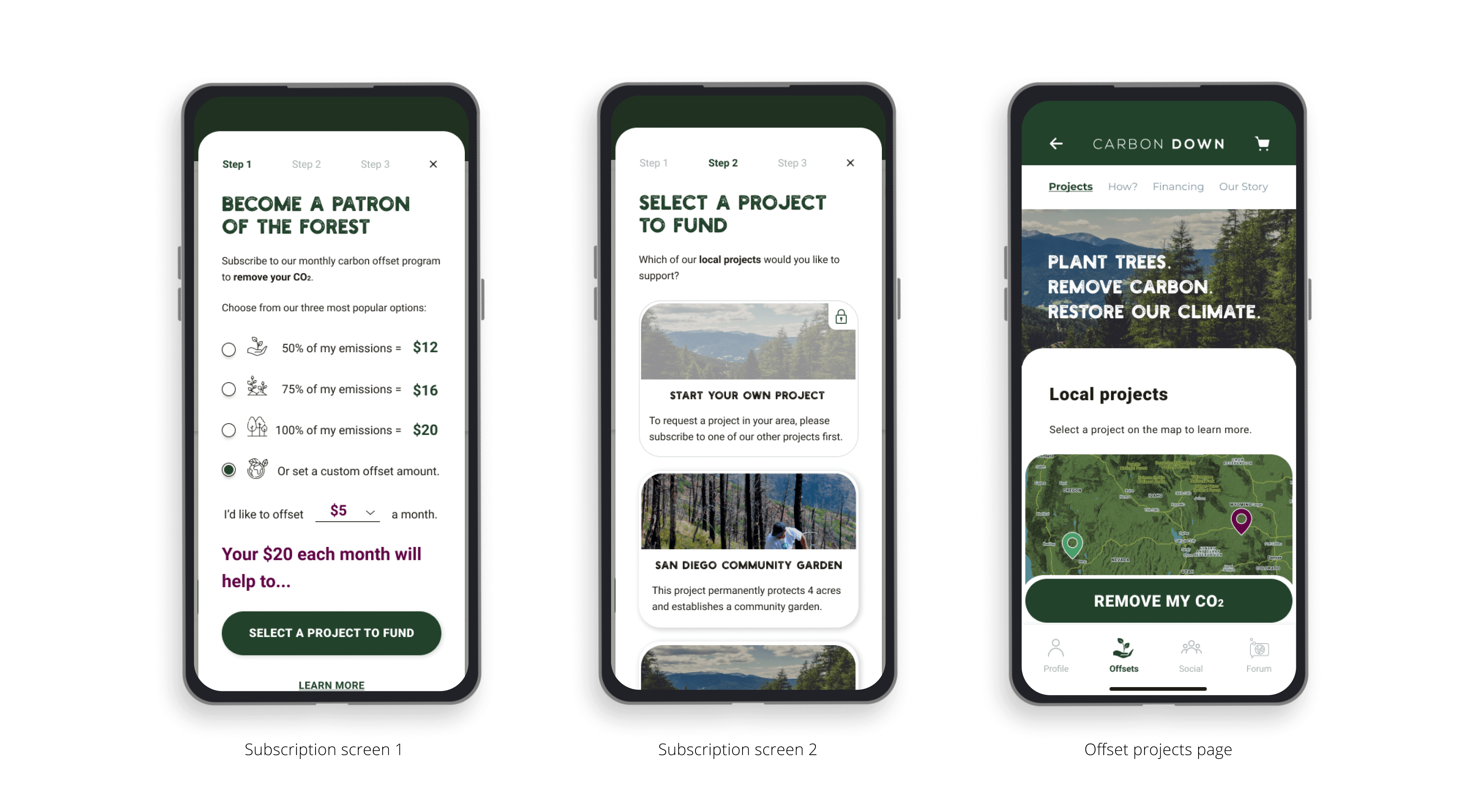 START YOUR OWN PROJECT

I changed the “Start Your Own Project” button. The first iteration had been a button that, when clicked, gave negative feedback. This confused users and made them feel bad, so for the final iteration, I made the button locked and explained to users why it was locked. 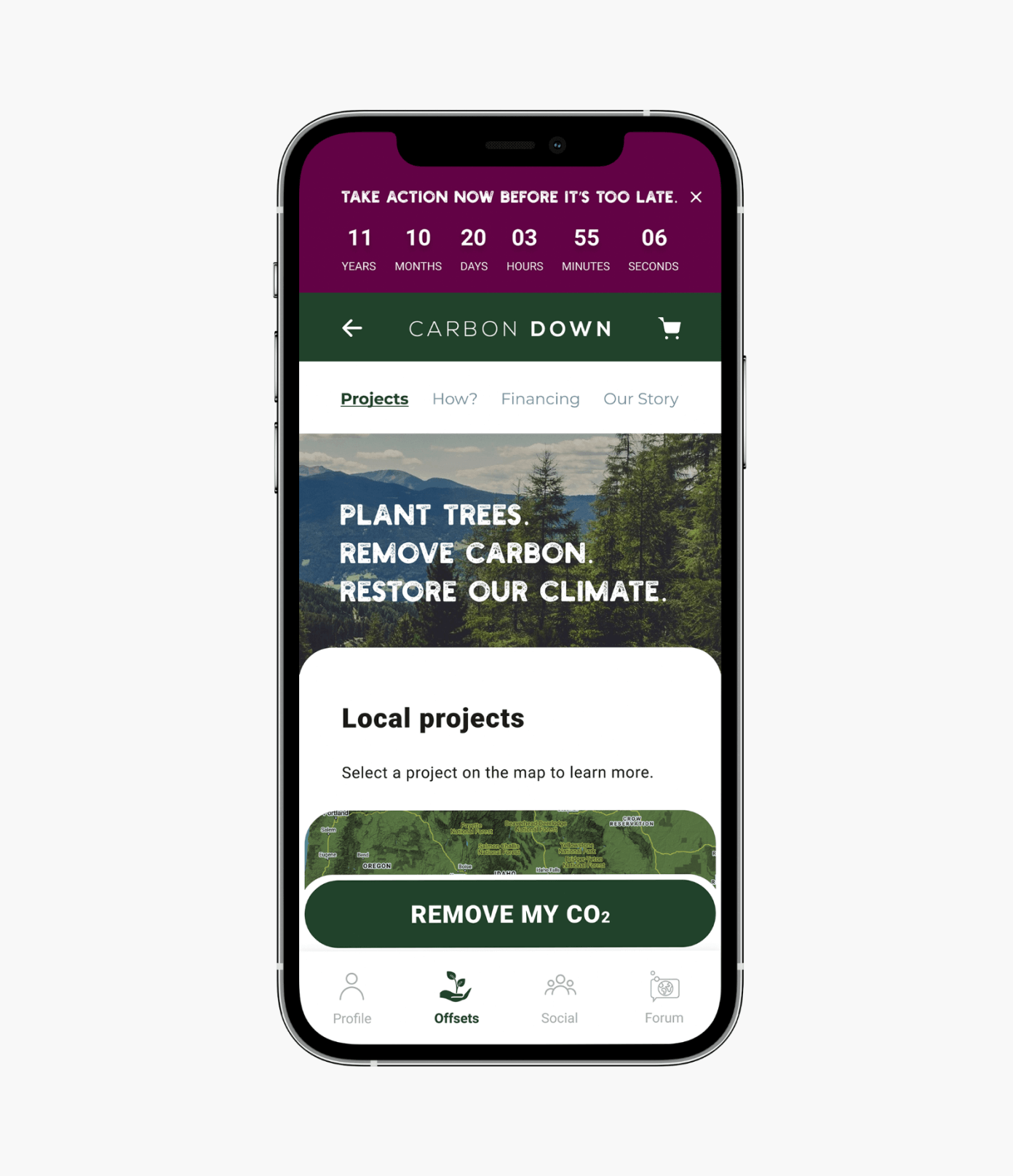 For the final prototype, the company also wanted to add a banner with a countdown clock showing users they only have 12 years until climate change becomes irreversible. This would inspire users to act more quickly.

The results from my last round of usability testing were successful. I had users say they felt knowledgeable. I had one user that expressed his terror over climate change in the beginning of the interview, and by only a few screens, he was saying he felt “good about himself.” Users left feeling more empowered than overwhelmed.

“As a user, I’m worried about climate change and the negative impact I’m having on the Earth. I want to do something to help, but I don’t know what I can do. This makes me feel overwhelmed, frustrated, and guilty.”

- User from first round of usability testing

“I would purchase offsets from this company. I think that the mission is good…purchasing carbon offsets, I think is sort of abstract, but the idea of replanting a forest that’s been burning down because we’re destroying the planet is like very clear…it’s not only something concrete, but it’s like, here’s something that I can do to fix something”

- User from final round of usability testing

It was great getting to work as a team to redesign an app. I learned a lot about switching gears and incorporating new ideas at the drop of a hat. I was also able to learn more about subscription design and how to sell an intangible product. Something else that I learned was the importance of white space. Something as simple as increasing white space can change how users view your app. It not only looks cleaner, it also makes information easier to take in. With added imagery and whitespace, users left the app feeling more knowledgeable than they had before.

I had a lot of fun working on this project; if you’re interested in purchasing offsets, the app should be live early next year!